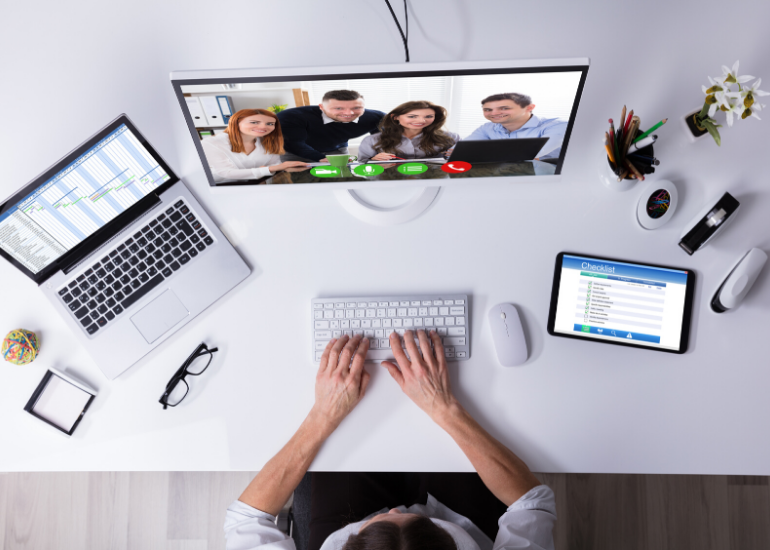 If you’re still employed, you’re probably having a lot of video conferences right about now. It’s gone from something that happened occasionally to something that has become a daily ritual for a significant percentage of now-housebound office workers.

And as this technology and its more frequent use is taking off with – dare we say – viral impact, let’s set some rules or guidelines as to its use. We’re all in this together, so they say, so make sure your pets are locked away, and that you’ve gone from your daily ‘work pyjamas’ to the more formal ‘business pyjamas’ and agree on the Top 10 rules for video or conference call etiquette.

Time is of the essence. Even though we’re seeing a lot more working from home, that doesn’t mean there’s anything less to do, or that everyone’s time is less valuable. The people you’re in a conference with have their own agendas and timetables to maintain, so getting more than two people in a (virtual) room at once is a rare treat. Don’t waste anyone’s time by fiddling with your set up: know what’s working, how it works, test that your headphones and microphone are working before your meeting time.

It’s widely believed that a clean workspace encourages more efficiency and a higher degree of productivity. You also don’t want anyone to see that the veneer of professionalism you convey over the phone and when you’re in the office is just covering up the truth – that you’re an unmitigated slob. Eyes may be the window to the soul; don’t let the webcam be a window to your poor housekeeping.

We’re in relatively new territory here, as can be seen in any number of news and current affairs shows on TV where correspondents and interview subjects are communicating via Skype from their home offices. That’s doing the right thing in terms of social distancing, but a bit of camera savvy wouldn’t go astray. Your device should be at right angles below your eyeline; we have in recent weeks seen a cavalcade of news pundits giving their insights distracted by a view of the contents of their nostrils. Use a stack of books or a shelf to elevate your device’s camera to your eye level.

“Sorry, I was on mute” is the saying in ‘Conference Call Bingo’ that everyone is going to score on every time. Pay attention to what’s being said and have your ‘finger on the trigger’ (aka mute/unmute) so that you might speak when the time calls for it. Also, let’s be real: anyone who says “Sorry I was on mute” sends the message that their focus was on something else, not the call. Check Twitter in your lunchbreak!

There’s a point to these calls, and if you’re in a conference call where there’s no video, it helps to know who’s there. Otherwise, what’s the point of everyone being in attendance? If the conversation is just one person speaking, it might as well be an email which everyone can ignore at their own pace, rather than ignoring it together over a 30-minute period. Be professional, basically.

Your point needs to be made, but a good point need only be made once. Being declarative, in the right volume and tone will make a world of difference, so make sure you do that, and keep any unnecessary noises (kettles, pets, kids, lawnmowers) at bay.

We’re discovering this daily, especially on news programs – between the downgrade in broadcast technology (from hi-def cameras to whatever personal device is at hand), the broadcasts are relying on the relative strength of the internet bandwidth at the home of the interview subject. As a result, we’re seeing a lot of dead air, but in small, three-to-five second doses. The same thing will happen in office environments, so it’s up to us to get used to the idea that it will take just a fraction longer for the words to get to their destination. That’s why listening is as important as ever. So is patience.

Nobody really likes meetings under normal circumstances, but given the current extraordinary ones, it’s probably a good idea to get the point across, get the meeting done, and get on with the rest of your workday. If you have a conclusion, or discovery by the end of your meeting, all the better to restate it with what was agreed upon, what the next steps will be and what the goal will be for the next time everyone meets.

Dropping in and out of meetings is another fine way to add to your ‘Conference Call Bingo’ card, bringing about “Who just joined?” or “Somebody’s left…?”. If you need to leave, or if they conference is wrapping up, make sure you let people know you’re on your way out.

Make sure you are fully clothed. Make sure you’re not scolding the cat for walking across your keyboard at an inopportune time, and just to be sure, stay at your desk. If you need to go to the bathroom, excuse yourself – don’t take your laptop (and team) with you!